The Orthodox Church is the original Christian Church, established by Christ the Lord and His Apostles, and continued throughout the ages by the successors of the Apostles, the Bishops, guided by the Holy Spirit, watered by the blood of the Holy Martyrs, and fed by the words and lives of the God-bearing Fathers and Mothers.

The Orthodox Church is a Hospital where the faithful come to be healed, rather than a courtroom where people come to pass a legal judgment.

It is the place where the faithful “are being saved,” i.e., are working out their salvation in collaboration with the grace of God, as opposed to the static one-time “I am saved” mindset.

” Almost from the very beginning, Christians referred to the Church as the “One, Holy, Catholic (from the Greek καθολική, or “according to the whole, universal”) and Apostolic Church”. The Orthodox Church claims that it is today the continuation and preservation of that same Church.”

“The Orthodox Church, in understanding itself to be the Body of Christ, and similarly in understanding the Christian life to lead to the unification in Christ of all members of his body, views the church as embracing all Christ’s members, those now living on earth, and also all those through the ages who have passed on to the heavenly life. The church includes the Christian saints from all times, and also judges, prophets and righteous Jews of the first covenant, Adam and Eve, even the angels and heavenly hosts. In Orthodox services, the earthly members together with the heavenly members worship God as one community in Christ, in a union that transcends time and space and joins heaven to earth. This unity of the Church is sometimes called the communion of the saints.”

” All members of the Orthodox Church profess the same faith, regardless of race or nationality, jurisdiction or local custom, or century of birth. Holy Tradition encompasses the understandings and means by which that unity of faith is transmitted across boundaries of time, geography, and culture. It is a continuity that exists only inasmuch as it lives within Christians themselves. It is not static, nor an observation of rules, but rather a sharing of observations that spring both from within and also in keeping with others, even others who lived lives long past. The Holy Spirit maintains the unity and consistency of the Holy Tradition to preserve the integrity of the faith within the Church, as given in the Scriptural promises.”

“According to Orthodox theology, the purpose of the Christian life is to attain theosis, the mystical union of mankind with God. This union is understood as both collective and individual. St. Athanasius of Alexandria wrote concerning the Incarnation that, “He (Jesus) was made man that we might be made god (θεοποιηθῶμεν).” See also 2 Peter 1:4, John 10:34–36, Psalm 82:6. The entire life of the church is oriented towards making this possible and facilitating it.” 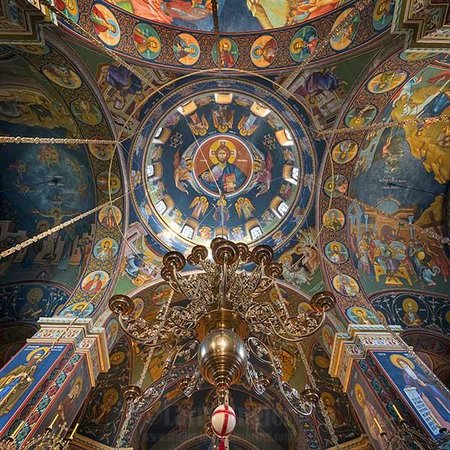